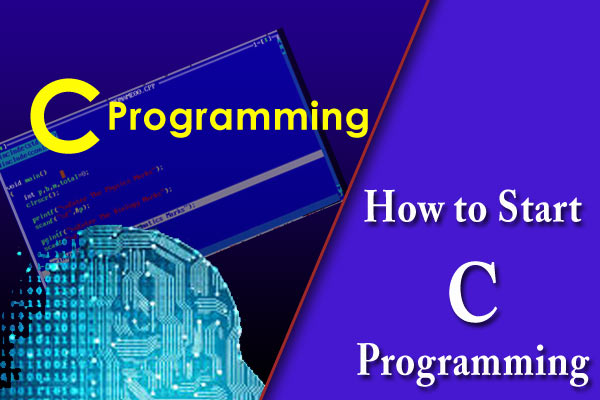 What is C Programming ?

C is a Computer Programming language, used to develop Operating Systems, Database, Language Compilers, Interpreters, Network Drivers and more Utilities. C is not a special-purpose but it is a general-purpose, procedural, structured, and High Level Language (HLL). C has now become a widely used professional language.

C was originally developed by Dennis M. Ritchie to develop the UNIX operating system at AT & T Bell Labs USA. C was originally first implemented on the DEC PDP-11 computer in 1972.

How to Learn C Language ?

Like English Language, we can also learn C language in some easy steps-

In the Step 1 - we already known about alphabets, numbers and symbols. Then we have to go ahead Step 2 -

In this step, there are three points- Keyword, Variables and Constant. Now we discuss in detail about these topic one by one

This topic understand such as. think.. in the house, kitchen is reserved for cooking food, you cannot used the kitchen for any other work like bathing. In the C programming languaguge some words are reserved for a special type of work, each word has some meaning and work, and these work and its meaning are understand by C compiler/interpreter/computer.

Now, we can define this, keyword is a reserved word, we are used it when required. Computer already known about these keyword. C has 32 keywords. such as.. int, float, printf, scanf, getch, getchar, getche,..etc.

Almost all the keywords are used in small letter and proper way and place. You can not used in wrong way. It display error.

In the above express, what called a and b?
obiviously a Variable. Vari + able is Variable. vari means change. Such a entity which values are changeable at each step is called variable

Above definition and example of variable is very suitable in algebra mathematics, also in C Programming Language. But also a special property of keywords in C are introduced here.. see...

All the computer software are used to store and manipulate the value or information. These values are stored in computer memory. Here some questions are arises in mind-

Answer of all Questions is - Variable

it means 'a' is a memory identifier or name or label of memory where 5 is stored. And when we have required to called this value we use 'a'

Constant is a value or user information that stored in memory. There are many types of values stored by user. These types of value is called data-types.

There are three basic types of constants are mostly used in C Programming Language.

What is Integer Constant?

When program required a number without any decimal point to store in memory or calculation. e.g. 5, 10, 32, etc. These numbers are in integer category.

What is Real Constant?

When program required a number with decimal point to store in memory or calculation. e.g. 5.2, 10.023, 32.50, etc. These numbers are in Real or Floating point category.

What is Character Constant?

When program required a value like user name , address and other this type of value to store in memory. e.g. "Amit Kumar", 'M', 'F', 'Y', 'N', "New Delhi", etc. These types of values are in Character or String category.

Types of variable defined for specific type of constant is called data type.

int is used to declare a variable to store a integer number. So it is called integer data type. int, long, short is integer types of data type

float is used to declare a variable to store a real number. So it is called float data type. float, double is float or real types of data type

char is used to declare a variable to store a character or String value. So it is called character data type. char is character types of data type

How to declare a Variable

A Sample Program of C Language

After written this program in turboc editor and save. Press Ctrl+F9 for Compile & Run

Now you feel your window a bit of time flicked but result not displayed. At this time use Alt+F5 to display result

Describe of the above Sample Program

This is the way of include of header file in our program.
Here #include is called a Preprocessor Directive, It tells to the compiler that include the given file in the following program before compilation of the code.

stdio.h here stdio is a header file where .h is a extension. stdio is also called as Standard Input Output

Header File is a file that contains some keywords definition. If you use any keyword / keywords in your program, You must include the corresponding header file/files in that program first. Header always included at the first position of the program.

void main() paranthesis () is the symbol of function, so main is a function, and void is return type of the function. void means NULL. so that we can say main is function which returns a NULL value. Overall main is such a function where compiler start from the execution of program and end to the execution, in C , C++ and Java

curly bracket { } is a start and close the main function. all the code will be written inside this curly bracket block.

How to install and configure Node.js

What is MERN Stack ?

Formulas and Functions in Excel 2013